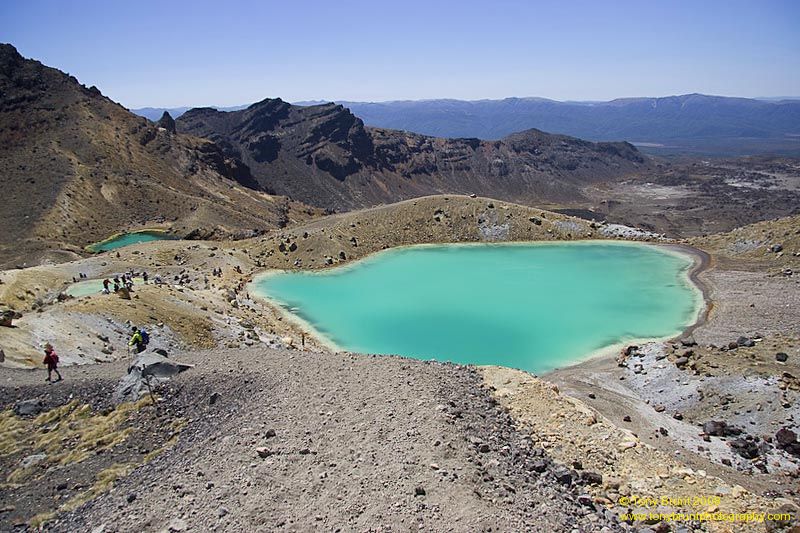 The North Island has a little jewel in its proverbial landscape crown, known as the Tongariro Crossing. I must admit, that, as a South Islander I have long held the belief that we in the South hold the monopoly on spectacular, grandiose scenery. So it was with a yawn, and so so attitude that I began the crossing at the Mangatepopo road end, some 10 kilometres from the Whakapapa resort. This hurts to admit, but I was wrong!

The first thing you notice as you climb down from the track transport truck is that this is one popular walk! Bus loads of people disgorge into the car park, with the sensible ones gathering round the route map to listen to the words of wisdom from transport operator, Arthur Jennings. Others leave early thumbing their noses to experience in order to miss the crowds. I stay to listen, for one I don’t want to miss the pick up at the Ketetahi end and secondly I want to know what to do if the weather turns bad.
At the start you could be forgiven for thinking you have been caught up in some bizarre rush hour ritual, bizarre because you are in the middle of no where, surrounded by hundreds of people. Initially it’s shoulder to shoulder, but once the Mangatepopo hut is passed and the track gets steeper, people find their own space and the rush hour feeling disappears.

At the head of the Mangatepopo valley there is a steep 300 metre climb to the saddle which lies between mounts Ngauruhoe and Tongariro and gives access to south crater. You can’t help but be amazed by this place, there’s nothing else quite like it in New Zealand! It’s lunar like landscape of craters, scattered pumice, piles of scoria and statue like mounds of super heated rock is true testament to the forces of nature that have been unleashed to create this volcanic desert.

At this point you are faced with a choice. Succumb to the promise of spectacular views from the summit of Mt Ngauruhoe, or continue across the southern crater and onto red crater. For those hardy souls with the fitness and perseverance who choose the Ngauruhoe option, there is another 1 – 2 hours of climbing before the 2291 metre summit is reached.

The first European to climb this active volcano was John Carne Bidwell in 1839. The local Maori tribe considered the mountain tapu, or scared place. So when Mr Bidwell returned, the local Chief, Te Heuheu Tukino II was none too pleased. Consequentially the second ascent was not made for another 12 years.
Whilst not a technically difficult climb, it is a little like climbing up a sand dune: there is a lot of “one step up and two back” walking, which becomes a little frustrating after awhile. The rock looks a little like clinker, straight from the heart of a coal fired boiler and the soil like ash. The only sounds that disturb the silence are the laboured breathing of fellow climbers and the calls of ‘rock’ from above. Mt Ngauruhoe doesn’t renege on it’s promise of spectacular views, provided it is a clear day! A walk right round the summit gives a truly panoramic vista! Blue lake, Lake Rotoaira and New Zealand’s largest lake, Taupo lie to the north, Mt Tongariro lies to the north west, the Tama lakes and Mt Ruapehu to the South. Looking inwards reveals the huge summit crater. The decent follows much the same route as the ascent, just be careful not to have people below you as you are likely to dislodge rocks onto them.

As you climb out of the flat wasteland that is the South crater you are greeted by Blue lake glistening far off in the distance, and a bright red, rusty coloured crater to your right. If you are in a “peak bagging” frame of mind, and still have some energy, Mt Tongariro is little more than an hours easy walk to the left, past frozen, molten statues of rock. If not, follow the track right, around Red crater and down quite steeply into North crater. At your feet lie the amazing turquoise blue of the Emerald lakes, nestled amongst the yellow-grey of the surrounding terrain. After passing Blue lake the track begins its long, some would say, torturous decent. It’s roughly an hour to the Ketetahi Hut, which offers majestic views northwards to Lake Taupo and a welcome respite from the downhill jarring. A short distance further on are the Ketetahi hot springs. These are still in private Maori ownership and we were asked to avoid this area both out of respect for its owners and for safety reasons as it is extremely unstable, and consequently dangerous. Another two hours, the last of which is through lush beech forest will bring you to the car park at the road end, off State Highway 47.

The English group I was with, with ages ranging from 35 – 67, had no trouble with the walk, and although very tired and footsore described it as one of the most beautiful walks they had ever been on. We had warm weather and cloudless skies. Another group we met had done the walk in atrocious conditions and described it as the worst experience of their lives! The moral is simple, pick your weather well, the enjoyment comes in the views. By all accounts the weather can change extremely quickly, so its best to be prepared for the worst.
History: The Tongariro crossing traverses Tongariro National Park, New Zealand’s first. It was gifted to the New Zealand Government by the Tuwharetoa tribe of Lake Taupo in 1887, “for the purposes of a national park”. Originally the park covered an area of 2600 ha, or a radius of 1.6 kilometres from the three peaks, Ruapehu (2797m) to the south, Ngauruhoe (2291m) in the middle and Tongariro (1968) to the north. The park was subsequently added to, and now boasts an area of 78,651 ha. In 1991 UNESCO accorded it World Heritage status.

Surprisingly, although much of the park is desert like, it is still home to more than 500 different species of native plants, including 12 types of native conifer, 36 varieties of orchid and more than 60 species of fern. The most common tree is the native mountain beech. A watchful eye will also see many small plants nestled amongst the alpine gravel fields.

Things to know: Be prepared by taking rain gear, food, warm clothing, gloves, hat, possibly a flask with hot chocolate or coffee and wear comfortable boots. The walk should take around 6 – 8 hours, depending on the side trips and the parties fitness. The track is well marked and easy to follow. To get to the beginning it’s easiest to use the track transport, (lots of cars get broken into in the car park) which leaves from the Whakapapa Information centre (and from Turangi and Tokaanu). Check Mountain shuttles (PH:0800 11 7686) web site for times and costs.

Maps: Parkmap 04, Tongariro National Park provides an excellent resource and should be carried.
Accommodation can be found in Whakapapa, National Park, Turangi and other areas nearby.