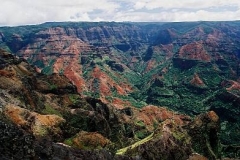 Kauai is Hawaii’s most northern island, situated some 116 kilometres (72 miles) from Honolulu across the Kauai channel. Physically the island forms a near perfect circle, with an area of around 1,430 square kilometres (552 square miles).  Packed within its circumference is a diversity of landscape that defies its tiny size.  To the north are miles of glorious beaches, interspersed with rugged coastline.  Coconut palms line the roads, with taro being grown in the Hanalei Valley (remember Puff the Magic Dragon “lived in the land on Hanalei”?).

A trip along the south coast reveals more spacious plains, with coffee crops and miles of abandoned sugar cane fields.  Turning inland on highway 550 takes you into the Waimea canyon, known locally as the Grand Canyon of the South Pacific.  As you climb there is a welcome temperature drop after the heat of the plains, with the air becoming pleasantly cool near the top.
Looking east from the road reveals steep sided mountains, covered in rich red soil and a variety of small trees and shrubs.  Far below the Waimea river snakes its way toward the coast.  From the lookout, some 18 kilometres to the east are Mounts Waialeale 1,598 m (5,148 feet) and Kawaikini 1598 m (5243′). On these peaks fall a staggering 465 inches or 11,685 millimetres of rain each year, the highest recorded anywhere on earth.  Yet incredibly, only16 kilometres away, on the south coast, the rainfall drops off to a mere 300 mm (10″) a year.  In fact, it’s common for each coast to exhibit different weather at the same time, depending on whether so called kona wind is blowing from the north or a trade wind from the south.  Generally its possible to find sunshine somewhere within a short drive of where you are.

Of the many beautiful places I explored on the island during my weeks stay, without doubt the 20 kilometre Na Pali coastline topped the list.  Its sheer, 1200 metre (4000′) high, fluted, wind worn cliffs rise directly from the rugged pacific coast with breath-taking suddenness.  Periodically, sheer sided valleys zig zag their way toward the centre of the island. A place not to be missed, whether you see it from a launch, helicopter, or kayak. There is also the popular Kalalau trail, which snakes its way around the rugged coastline to end in Kalalau Bay.

For an over view of the coast, drive up to the Kokee state park, at the head of the Waimea Valley.  The Kalalau lookout has wonderful views, but you must get there early, as it normally fogs out around 11am.  Walks start at the park museum.  The Nualolo Trail descends steeply to the Nualolo lookout, right on the edge of the cliffs.  From here you get fabulous views down the Na Pali coast.  Return by the Awaawapuhi trail.  In total its about an 8 mile walk.